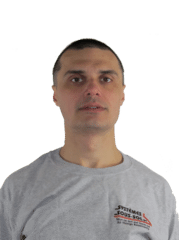 Andrei is a key member of the foreman team. He does a number of installation-related tasks including digging out trenches, installing sump pumps, repairing and stabilizing foundations, injecting cracks and more. Andrei likes his work because it is different every day and he enjoys his experiences.

When not on the job, Andrei enjoys surfing the web, chatting and watching movies.

Customer Reviews
About Me
Testimonials
from customers I've helped!

Repairing the foundation of a house in Brossard,...

Stabilize a foundation in...

Basement Finishing in a basement in Montreal, Qc

Brossard, QC Foundation repair of a house...more »
Saint-alphonse-rodriguez, QC Stabilizing a foundation in...more »
Before and after photos from jobs I've worked on:
Back to Previous Page Back to Meet The Team