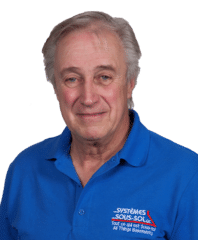 Peter always liked challenges and solving problems. He saw an opportunity with Systèmes Sous-sol Québec to do just that, help people solve their wet basement problems and make their homes a better place. Peter just loves seeing their satisfaction when the job gets done and how happy they are. He has a very technical background and solving problems is Peter’s forte. He wants to share his experience with others.

Systèmes Sous-sol Québec saw what an asset Peter would be to the company with his experience and ingenuity and immediately brought him on board. By sharing his experience with homeowners and explaining the effects of water or foundation damage, he can really relate to them and prevent problems before they occur or worsen. He is a trusted and valued member of the Systèmes Sous-sol Québec team and upholds the standards of the company. Peter has been thoroughly trained and has earned the title of “Waterproofing and Foundation Repair Professional” through the Basement Systems and Supportworks international networks.

Systèmes Sous-sol Québec is the regional dealer of the Basement Systems International Waterproofing Network, a group of over 350 of the best waterproofing contractors in the world, who have exclusive access to patented products, comprehensive training, and support through the international company. Systèmes Sous-sol Québec is also the dealer of Supportworks Inc., a foundation repair contractor network across the United States and Canada, helping residential and commercial property owners fix their failing foundations.

Peter enjoys meeting with homeowners and helping them solve their basement water, crawlspace and foundation problems, enabling them to get more out of their homes.

He really likes to invent or do things that will help people improve their everyday lives, and has managed to make a lot of friends along the way.

Customer Reviews
About Me
View all Reviews
Testimonials
from customers I've helped!
View all Testimonials

Replacing an old pump in Roxboro by our SuperSump...

Waterproofing a basement in Candiac, Qc

Foundation crack and efflorescence at Candiac

Insulating your attic, it's saving in energy...

Water Infiltration through Crack in Foundation...

Beaconsfield, QC Insulating an attic, it's...more »
Pierrefonds, QC Repairing a sinking cement...more »
Brossard, QC A sagging foundation in...more »
Montreal, QC Encapsulation of a crawl...more »
Before and after photos from jobs I've worked on: