Before and After Pictures from South Glengarry

Encapsulation, waterproofing and stabilization of a crawl space in South Glengarry, Ontario

We have transformed this crawl space so that it is no longer wet and is solid.

- We encapsulated it all with our CleanSpace vapor barrier membrane.

- We solidified the beams thanks to the SmartJacks support pillars.

- We connected our SaniDry XP dehumidifier to the pump system so that the water particles in the air are intercepted and evacuated away from the house.

We are happy to have been able to solve these problems in the crawl space. For a free estimate, click here!

See All Before & After Images
Company Awards 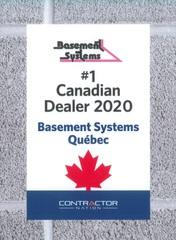 #1 Canadian Dealer 2020
We are so proud to announce that we have won, for another year, the Top Candian Dealer award within the... [Read more] 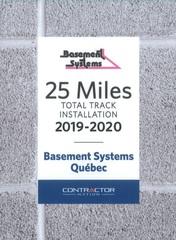 25 Miles Award
After having served thousands of clients and repaired thousands of basements, we have finally reached the great milestone of the... [Read more] 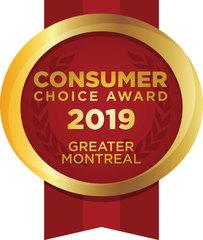 Click the icons to see what our customers had to say.

We not only adhere to the highest industry standards, we strive to be the industry leader in the home improvement-related services we provide. We also use state-of-the-art products and technology which are designed to fix your home. We are the authorized Basement Systems dealer in South Glengarry, ON.

Services we offer in South Glengarry: 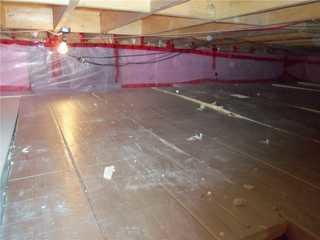 Did you know that we serve Gatineau and the surrounding area? A South Glengarry customer contacted us in 2015 to talk about his crawl space problem...
Click to read solution...
More Case Studies
Photo Galleries From South Glengarry

The LawnScape Accessory is an escape vent for line-ups that are made in the grass without disturbing your terrain. Our client goes over it without problems and your discharge line will not get clogged with mud.

The TripleSafe gives you peace of mind with its three built-in sump pumps that address the following common problems: pump failure, too much flow and volume of water for the pump, power failure.

SmartSump is one of our most popular systems. With the UltraSump alarm, you can rest assured that your home is protected from water infiltration.
Job Stories From South Glengarry, ON
A fully encapsulated crawl space in South Glengarry, ON

Our client from South Glengarry contacted us in 2015 to talk about his crawl space problem and wanted to know what solutions we can offer him that could solve the problems permanently.

In addition, he has informed us also that he wanted to sell his house, but he needed to fix its problems so that potential buyers won’t be scared off.

Also he has informed us that he was mainly interested in our dehumidification system, because he felt that the air was still wet.

After going for a free inspection, we proposed a complete encapsulation solution with our products specially designed by engineers for the space of the crawl space, but our client decided to install only the SaniDry XP.

In 2016, the client sold the house to a new owner, Mr. Ronald who was able to benefit from the guarantee.

This client was interested in the complete encapsulation solution. So, two and a half years later, we installed a CleanSpace membrane that is an ultra-resistant vapor barrier specifically designed to block water vapor. In addition, to permanently stabilize the foundations, we have installed SmartJacks support pillars that are specially designed to fit the height of the crawl space while being adjustable to be tightened over time over time. Finally, new owner has decided to replace the old pump with our three-pump system, the TripleSafe. This system consists of 3 sump pumps, one of which is battery operated during power outages. We also installed another sump pump, the SmartSump, because the space and the amount of water are very bulky. Thus, all this forms a very efficient and safe system which gave our client an extra peace of mind during rain storms and strong winds.