Basement Systems Quebec awarded for ranking among the top 50 dealers

Basement Systems Quebec recently received an award for ranking among the top 50 dealers in the annual Basement Systems Convention held this month of August in Connecticut - USA. 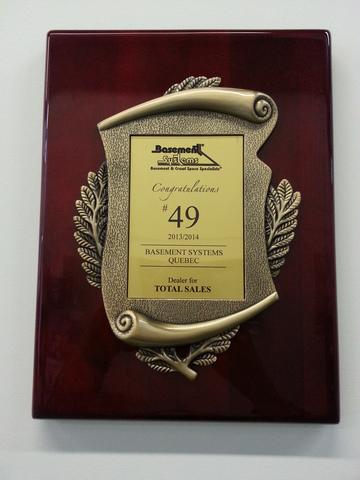 This is a good achievement, as the company has been growing recently, and has consistently ranked in the top 50 waterproofing dealers in the past few years.

When asked about this award, Michael Haydamous, the company president, said :"We are satisfied with ranking between the top 50 dealers consistently for the third year, but I know we could have done better. We have had the best months of June and July ever, and we are looking to build up on this to set records for the whole year. We are aiming to double our figures this year as compared to last year. This achievement is possible due to all of our employees who worked hard during the year, to the great referrals we have been getting from real estate agents who have helped us a lot, as well as previous clients who have been referring us and spreading a great word about the company!".

Basement Systems Quebec is a basement drainage contractor in Montreal, Quebec, specializing in solving basement water problems. They also specialize in crawl space waterproofing and repairing foundation cracks and settlement. As a Basement Systems, Inc. and Foundation Supportworks dealer, they provide their customers with industry-leading products and other benefits like a transferable lifetime warranty for their basement waterproofing systems. They also provide free inspections and written estimates. Basement Systems Quebec is a licensed contractor with a team of Certified Waterproofing and Foundation Repair Professionals.

Basement Systems, Inc. is the leader in the development of products used to provide a dry, below-grade space. These waterproofing solutions are delivered through a network of trained, experienced dealers. Basement Systems is a network of more than 300 dealers throughout the United States, Canada, United Kingdom, and Ireland. Each dealer receives comprehensive, on-going training at company headquarters in Seymour, Connecticut. All Basement Systems dealers have the same goal: to provide a permanent solution for healthier basement environments.